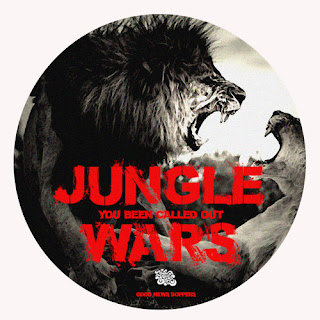 The Good News Boppers camp unleash their mighty 'Jungle Wars (You Been Called Out)' EP off the back of last years infamous Jungle Wars campaign on Soundcloud - an epic track making soundclash where producer's would make the roughest of jungle dubs and call out another producer to make a track to compete against their efforts. The GNB label ran their own Jungle wars competition with the successful entrants winning not only a place on the 'Jungle Wars (You Been Called Out)' EP and subsequent release, but also a one off dubplate of their tracks in addition.

The first Jungle Wars competition winner, The Mighty Dreadnaut sets the pace with the massive, roughneck, amen workout, 'Guns Out (Bloods Gonna Run)' complete with copious amounts of aggressive rudeboy chatter and a filthy bassline to boot. Solo Premium steps up to the plate next 'threatening to kill a sound bwoy' with '666 Million ways To Die', which drops warped reversed bass throbs alongside a restrained yet stepping break.

NoisePollutionProject retaliates with 'The Season Change' next, incorporating a classic reggae, trumpet sample with manic, 'Dred Bass' 'whomps!!!!', moody piano notes and one hell of a tearing amen break assault. Good News Boppers label head honcho, aka Abstract Illusion closes 'Jungle Wars (You Been Called Out)' off with his nuskool jungle/D&B crossover, 'Basstafari' which combines frenetic, rolling breaks and smatters of ragga chat with a monstrous, all-enveloping, synth-bass riff to devastating effect.

All in all, four essential dance-floor devastating tracks for anyone who considers themselves as being a serious junglist. 'Jungle Wars (You Been Called Out)' is available to purchase from all good digital download stores from Monday the 8th of June.